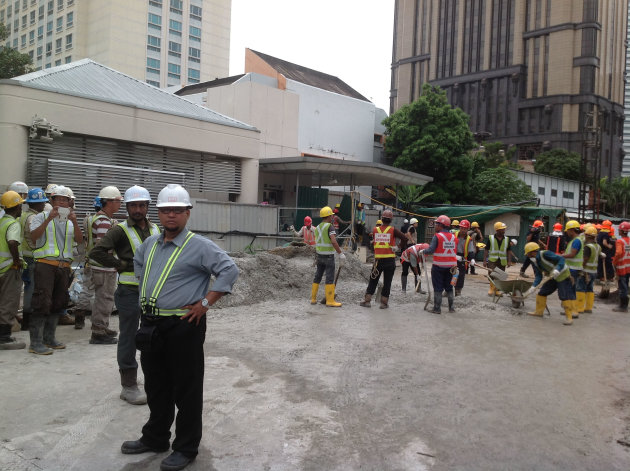 Two construction workers died after an underground scaffolding collapsed at the construction site for the Downtown Line at the junction of Victoria Street and Rochor Road.

The Singapore Civil Defence Force (SCDF) found both bodies one metre apart from each other, submerged in wet cement and pinned under planks of wood and scaffolding.

The complexity of the operation meant SCDF had to keep pumping water through a hose into the tunnel to keep the cement wet so they could extricate the bodies.

Up to 40 personnel, including members from the elite Disaster Assistance and Rescue Team (DART), are involved in the search and rescue operation.

Another eight workers suffered minor injuries and were sent to Raffles Hospital before the SCDF arrived. Four have since been discharged.

The LTA has since suspended all construction work at all other downtown lines and engineers have been told to check the scaffolding at all other sites before resuming work.

The incident is the latest in a string of mishaps to befall Singapore's rail transport network.

Earlier this week, the SMRT was fined S$2 million for the twin December breakdowns by the LTA. The transport regulator itself has come under fire after Transport Minister Lui Tuck Yew admitted in Parliament that it failed to ensure SMRT's responsibilities were kept in check.

Turning to the latest incident, the LTA said in a statement that at about 650am, the temporary scaffolding used for the construction for the new Downtown Line (DTL) Bugis Station subway link roof slab gave way.

The scaffolding structure was about four metres high and was being used to construct the tunnel ceiling linking the old and new Bugis stations.

In a separate statement, the Ministry of Manpower said the accident occurred when workers were pouring concrete into the formwork when the structure supporting the formwork collapsed.

The accident happened about 4 metres beneath the surface and was located between the new and old sections of Bugis MRT station, which was part of the project to form an underground linkway between the two.

The project is a joint venture between Soletanche-Bachy and Koh Brothers.

When fully complete, the line will be about 42-km long with 34 stations.

It's understood work on Downtown Line 1 (DTL 1), which runs through busy corridors like Bugis and Chinatown is almost complete.

DTL 1, which is due for completion next year, is a loop that will connect to DTL 3, which runs to eastern towns like Bedok and Tampines.

The DTL line will be operated by SBS Transit.